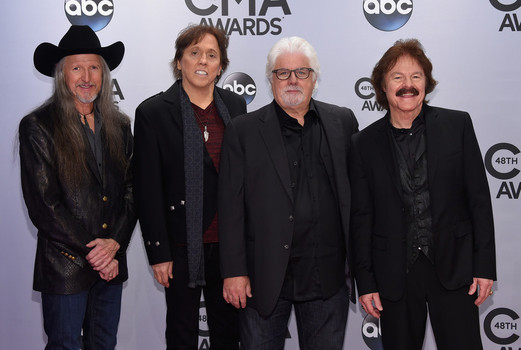 The American Society of Composers, Authors and Publishers (ASCAP) will honor The Doobie Brothers with the Voice of Music Award at the 32nd Annual ASCAP Pop Music Awards in Los Angeles on April 29. The award, which is presented to an artist or group whose music gives voice to the spirit of a generation, is a fitting tribute for The Doobie Brothers who have been rockin’ audiences for over four decades and have sold over 48 million albums. Other honorees include rock heavyweights KISS, who will receive the ASCAP Founders Award, and St. Vincent, who will be presented with the Vanguard Award at the invitation-only gala taking place at the Lowes Hollywood Hotel.

Formed in 1969 by Patrick Simmons and Tom Johnston, The Doobie Brothers made their mark with a run of punchy hits on Warner Bros. Records, attaining radio and chart ubiquity in the early ’70s. Michael McDonald, whose soaring vocals pushed the band to new commercial and critical heights, later augmented the group’s line-up. Their #1 singles “Black Water” and “What a Fool Believes” lead a catalog of indelible songs that includes “Listen to the Music,” “Jesus Is Just Alright,” “Rockin’ Down the Highway,” “Long Train Runnin’,” “China Grove,” “Take Me in Your Arms,” “Takin’ It to the Streets,” “Minute by Minute,” “You Belong to Me,” “The Doctor” and more. In all, The Doobies have tallied four Grammys, five top 10 singles and 16 top 40 hits. Beginning with their multi-million-selling sophomore collection Toulouse Street, The Doobies have three multi-platinum, seven platinum, 14 gold albums and a rare diamond album for their Best of the Doobies, which has sold over 12 million copies. In November, The Doobies released their 14th album Southbound, featuring new recordings of their best-loved songs in duet with country superstars Brad Paisley, Blake Shelton, Toby Keith, Zac Brown Band, Jerrod Niemann, Sara Evans and more.

KISS is one of the most influential rock and roll bands of all time, selling over 100 million albums worldwide in their 40-year career. Formed in the early 1970s, KISS has achieved staggering career milestones, boasting decades of record-breaking tours around the globe. Today, the KISS “brand” has infiltrated pop culture with its unforgettable personas Starchild, Demon, Spaceman and Cat. With hits like “Strutter,” “Shout It Out Loud,” “Detroit Rock City,” “Rock and Roll All Nite,” “Christine Sixteen,” “I Was Made for Lovin’ You” and “Beth,” KISS has 28 gold albums.

American singer-songwriter St. Vincent began her career as a solo artist in 2007 with the release of her debut album Marry Me. After her work was featured on two of The Twilight Saga motion picture soundtracks, St. Vincent went on to create her renowned self-titled fourth studio album, which topped countless Best of 2014 critics lists and garnered her a 2015 Grammy Award for Best Alternative Album. Having opened shows for such acts as The Black Keys and Arcade Fire, St. Vincent is now taking the front of the stage with performances at the Coachella and Sasquatch Festivals this year, putting this multi-instrumentalist at the forefront of alternative music.