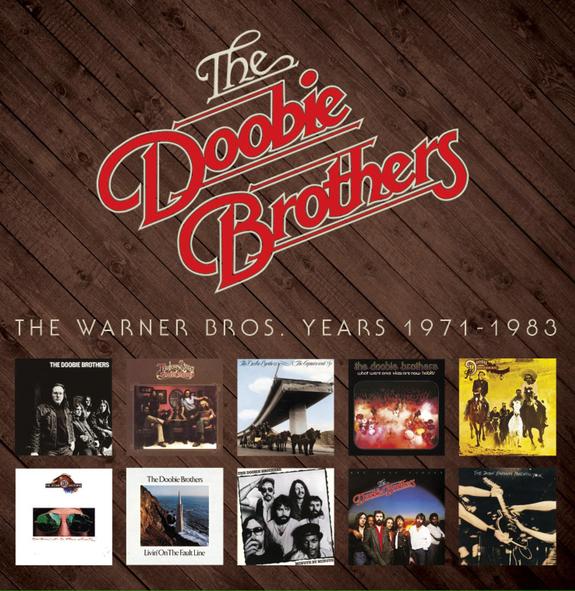 10-CD Boxed Set Includes Every Album The Legendary â€¨Band Recorded For Warner Bros. Records Between 1971 And 1983

Available On July 24 From Rhino

The Doobie Brothers recorded some of the band’s most iconic music during their dozen years with Warner Bros. Records, scoring major hits with timeless tunes like “Long Train Runnin’,” “Black Water,” and “Takin’ It To The Streets.” With 46 million albums sold during their outstanding career, The Doobie Brothers have nothing left to prove, but this summer the group is still “Rockin’ Down the Highway” as they tour North America.

The group’s commercial breakthrough came with its sophomore effort, Toulouse Street, which boasted popular tracks like “Listen To The Music” and “Jesus Is Just Alright.” The string of hits continued on The Captain And Me with “Long Train Runnin’” and the classic “China Grove.” The Doobie Brothers notched their first #1 in the funky “Black Water” from their 1974 album What Were Once Vices Are Now Habits.

In 1975, the band began to expand Pat Simmons’ and Tom Johnston’s rock and country influences with R&B and even scored a hit with its cover the Motown track, “Take Me In Your Arms (Rock Me A Little While.)” In 1976, with the addition of Michael McDonald to the band, they introduced more R&B and keyboards to their rocking sound and the hits kept rolling with the title track from Takin’ It To The Streets. In 1979, The Doobie Brothers won four Grammy® Awards on the strength of its triple-platinum album, Minute By Minute. The final disc in this new collection is the 1983 live album Farewell Tour, which includes performances of songs that spanned the band’s entire history to that point. This 10 CD Set represents an outstanding body of work from one of America’s most popular bands.