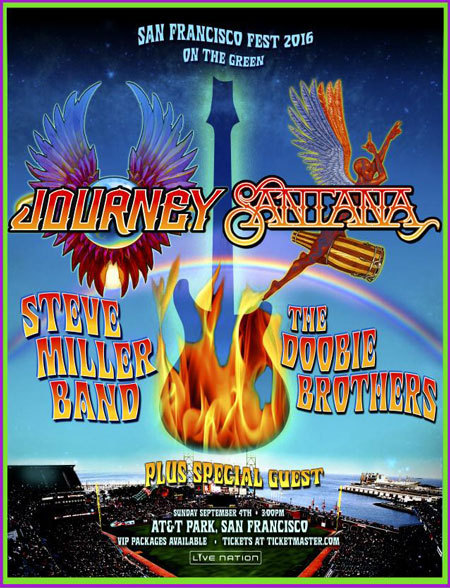 JOURNEY, SANTANA, STEVE MILLER BAND, THE DOOBIE BROTHERS, and special guests will appear in concert for one night only on September 4, 2016 at AT&T Park. This historic concert is the only opportunity to see these iconic Bay Area bands performing on the same bill. Tickets go on Friday, March 18 at 10AM via Ticketmaster.

“This concert is the ultimate homecoming show for us and we are blessed to perform with our Bay Area friends,” says JOURNEY. “Our history with everyone runs deep and it’s going to be a show you won’t want to miss.”

“We are thrilled to be a part of this historical event in San Francisco says Santana Manager Michael Vrionis. The audience will have the opportunity to see some of the Bay Area’s most iconic Bands perform in one event. We hope to see you all at this once in a lifetime concert.”

This once-in-a-lifetime event starts at 3PM and will continue into the evening, paying homage to the legendary “Day on the Green” concerts, one of the first recurring festivals in the U.S. that began in 1973 and continued into the early 1990s. Between these four music giants, JOURNEY, SANTANA, STEVE MILLER BAND and THE DOOBIE BROTHERS have performed on twelve “Day on the Green” concerts from 1975 through 1983.